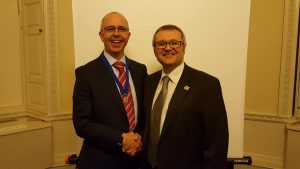 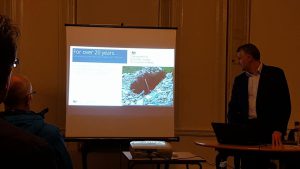 Write a blog post, they said, it’ll be easy, they said… So, uh, yeah, hi, I’m Amy, newest recruit for Taylor Tuxford Associates. I’m going to be the company Engineering Geologist, social media wrangler and have the dubious distinction of being Rhys and Anne’s daughter

I studied Geology at the University of Manchester for my undergraduate degree after which I promptly discovered that no matter how much fun it might have been, there are surprisingly few jobs that use a straight geology degree!  And it was fun… or at least that’s the word the lecturers were using when we were halfway up a mountain in Snowdonia and the rain was coming in sideways. There was also the point at which my flatmates were convinced I was doing a degree in joining the dots and colouring in, but I’m not bitter about that.

I took a break from all things geology related for a year or so after finishing my undergraduate degree, before starting a Masters’ degree in Engineering Geology at the University of Leeds. Engineering geology is essentially geology but with less rocks and more soils and maths.

It later turned out that an Engineering Geology Masters’ degree is basically a gateway to academia and I was lured even further to the dark side by the promise of funding for a PhD.

In related news, I may have lost control of this metaphor.

Anyway, I moved to Sheffield, started work in the Civil & Structural Engineering department of the University of Sheffield and was made to interact with Engineers on a daily basis. Having grown up with a Structural Engineer parent, I was well practised in distracting them by offering large amounts of tea and biscuits and, if necessary, scaring them away by discussing such things as Miller Indices and geophysics.

Working for a PhD is a full time job in which you become more than a little obsessed over a single topic and slowly develop a case of imposter syndrome. You learn a lot about your topic and learn even more about all the things you don’t know, leading to a constant feeling that you’re a fraud and that you don’t belong there and that someone, somewhere must have made a mistake. I’m assured that everyone in our research group felt that way at some point.

But I am now one of only a handful of people in the UK and Ireland that can even vaguely consider themselves an expert in expansive pyritic mudrocks… which is nice.

I’m going to be working with Rhys and Michelle on the Geotechnical side of things within the company, as well as taking on some of the design and site investigation work.

We happened across an interesting article recently on Scope’s website where they were discussing whether loo designers see the users of the disabled facilities as genderless.

A guest writer on their Blog, Milo, presented a thought-provoking post about disabled toilets but from a very different perspective: the provision, or lack thereof, of multi-sex facilities within these toilets. More specifically, the general lack of vending machines for tampons, condoms etc.

Designed for People or Compliance?

It’s fair to say that most designers will follow the guidance set down in approved Document M for disabled toilet layouts and consider that they have successfully achieved compliance with the Building Regulations, job done.

Milo’s perspective shows us that as Designers we must remember that the building must be suitable for everyone, that we are designing spaces for Humans with all kinds of needs, and make sure that we’re not just complying with legislation and guidance. Oh, and we need to provide more mirrors.